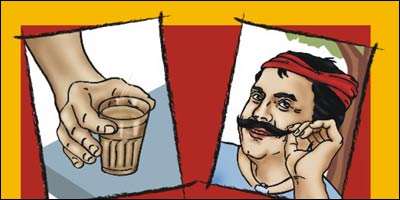 I just read an article in the NYT about tea in Darjeeling (where my husband roamed the streets and the halls of his school for many a year–now he refuses to drink a drop of tea! He also introduced me to momos (Tibetan potstickers) another Darjeeling speciality, thou I’ve never had them in Darjeeling having never set foot here–but have woofed down many in other hill stations (NYT seems gaga about India these days) of India!). Incidentally, the tea thrown into the harbor that infamous night in Boston by the colonists was Darjeeling tea!

A nice passage–the author is requested to bring back some tea for friend :

“A day later, on a slow Internet connection, I received an instant message from a friend in New York: Could I bring her some first flush?

“It’s for a dear friend from Darjeeling,” she wrote. “He’s dying, and he hasn’t lived in India for more than 60 years, but he still dreams about the tea.”

I had a mission. On my way home, I bought a wooden box of Makaibari’s first flush and delivered it to my friend soon after my return. A few weeks later, she forwarded me her 97-year-old friend’s thank-you e-mail note.

“It was so precious,” he wrote, “that I shared part of it with the Namgyal Monastery” in Ithaca, N.Y. The “beautiful little casket” of tea now sits at the feet of the monastery’s Buddha, he added, and “in the major pujas to come, it is your gift that will be brewed.””