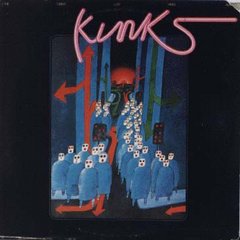 Back to Darjeeling, not the city but the “Limited” soundtrack…love the Kinks, always have, though I suppose I got into them late, when “Give The People What They Want” came out–(1983?) over here in the states, I was 13 or 14 and fell in love. Yes, I suppose I was a late Kink’s fan. There are many great songs on that record (Robert Christgau – the great rock critic, formerly from the Village Voice – now NPR – gave the album a “C+ in 1981 – oh well, I guess he wasn’t 14 when he first heard it nor was he likely simultaneously enjoying “Foolin” by Def Leppard…)

I loved – “Around the Dial” – (forgive the terrible non-video) Radios of the world are tuning in tonight, Are you on the dial, are you tuned in right?….One of our DJs is missing…. “Art Lover” (I’m not a flasher in a rain coat, I’m not a dirty old man, I’m not gonna snatch you from your mother, I’m an art lover) “Destroyer”, and my favorite: “Yo Yo”.…The Kink’s always seem to surpass beyond the simple, yeah, yeahs in rock and turn them kind of melancholy. The yeahs, yeahs in this song are a wonderful afterthought- they seem sung by a gang of disillusioned girls from Manchester…

There are many different people,
Livin’ double lives.
One for the office,
And one that they take home to their wives.
He sits in the armchair, watching channel 4,
With his brains not expected home for an hour or more.
He’s still drifting to and fro, like a yo-yo.

His wife is in the kitchen, fixin’ her old man’s tea
She’s thinking to herself,
“He’s not the man that married me, yeah, yeah, yeah, yeah.”
They used to laugh together, now he’s never at home.
Now she’s fighting back the tears, she can’t even laugh alone.
She’s just sitting by the telephone, like a yo-yo.

Later, I listened to their earlier music and it never felt dated, even today it doesn’t.

My girlfriends run off with my car,
And gone back to her ma and pa,
Telling tales of drunkenness and cruelty.
Now I’m sitting here,
Sipping at my ice cold beer,
Lazing on a sunny afternoon.

Here’s a short documentary about the discordant brothers – Pete Quaife, the bassist, describes the Davies brothers as, “Jimi Hendrix on that end and Noel Coward on the other end…..”

Why are our early years seemingly so influential as far as music goes? Our ears aren’t so well adjusted…as far as knowing what melody, etc. is in theory but what we hear again and again is remembered forever, “Rubber Soul” is ingrained in my mind forever as I played it six or seven times a day one summer in my father’s apartment, I was about 8, I think…what summer – 1977? The album had been out many years but I suppose my dad had his copy lying around, and I played it relentlessly, still when I hear this album, I feel like I’m seeing an old friend again….”I’m Looking Through You” has to be one of my favorites on the album – it’s such a rousing, rocking song filled with so much energy yet so simple – a strange, cheerful way to warn a lover of betrayal and deception:

Why, tell me why, did you not treat me right?
Love has a nasty habit of disappearing overnight

Speaking of Darjeeling….GoaPress.com
Scroll to top