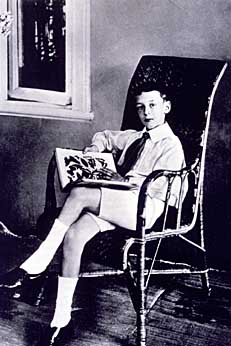 I’ve been reading Speak, Memory , Nabokov’s memoir of his childhood in Russia and glimpses of his later years abroad. All biographies in a sense should be like his; a mishmash of the mundane (endless descriptions of a succession of tutors), minute details of daily activities (his tireless endeavor of butterflies in the fields) and then plunk–a paragraph or two of stunning reflections, almost left as a cliffhanger for the reader. It’s like listening to an eccentric uncle you respect and admire who led an exotic life but he might go on a trifle too long about his whimsies or adventures. Just when you begin to nod off, he states something poignant, beautiful and you forgive him instantly.

After the stretch about butterflies: “I confess I don’t believe in time, I like to fold my magic carpet, after use, in such a way as to superimpose one part of the pattern upon another. Let visitors trip. And the highest enjoyment of timelessness–in a landscape selected at random–is when I stand among rare butterflies and their food plants. This is ecstasy, and behind the ecstasy is something else, which is hard to explain. It is a momentary vacuum into which rushes all that I love. A sense of oneness with sun and stone. A thrill of gratitude to whom it may concern–to the genius of human fate or to tender ghosts humoring a lucky mortal.”

In one interesting passage, he relates early on in his life, how astounding his early sense of color was and how he associates letters with colors, “R” is a sooty rag being ripped, “U” is brassy with an olive sheen. Surely this correlates with his lifelong love of Lepidopterology. Nabokov’s son Dmitri writes about his father’s synesthesia on his blog! The name “Nabokov” and “blog”- clearly a misnomer! Much like the autistic savant Daniel Tammett , who also has synesthesia–in his case, visualizing numbers with colors which helps him along in his photographic memory. Tammett had an epileptic seizure at an early age possibly which triggered his autism, he is also a mathematical genius and has an amazingly aptitude for languages–learning Icelandic fluently in a week. Incidentally, Nabokov who was sick much of his youth–Scarlett fever–also went through a spell of having a high aptitude for math and also experienced hallucinations as a child. His mother had synesthesia as well, associating musical notes with colors. Nabokov had no ear for music, it skipped a generation and went to his son (who was an opera singer at one point), he says, amusingly enough in the book, “Music , I regret to say, affects me merely as an arbitrary succession of more or less irritating sounds.” The sentence itself is shocking to some degree as I’ve never really heard anyone who is repelled altogether by all music, indifferent maybe, yes. Nabokov, in itself is hard to pronounce (though the speaker sounds like he’s annunciating the “v” hard merging it into “ffs” like the French apparently do) and I can’t seem to give up my horrible American pronunciation–Nabokov himself could only describe it’s varities of pronunciation so aptly, although the corrected version tends to sound like a tedious square dance one is forced to engage in.

He left Russia at twenty and remained abroad for the rest of his life, never returning home. With exile comes a constant nostalgia one is forever carrying–a burden or a crutch but a relevant crutch as it’s supplied much muse, also a prominent theme often found in books these days exploring the immigrant experience . “The act of vividly recalling a patch of the past is something that I seem to have been performing with the utmost zest all my life,”

Speaking of exile, Salman Rushdie and Orhan Pamuk speak of being in exile and writing about the cities they left behind on the New Yorker’s video series . As the old adage goes: One must distance himself from his subject to write well about it–Nobokav’s does this best and without his extensive exile we would lose much of the haunting passages he’s written.