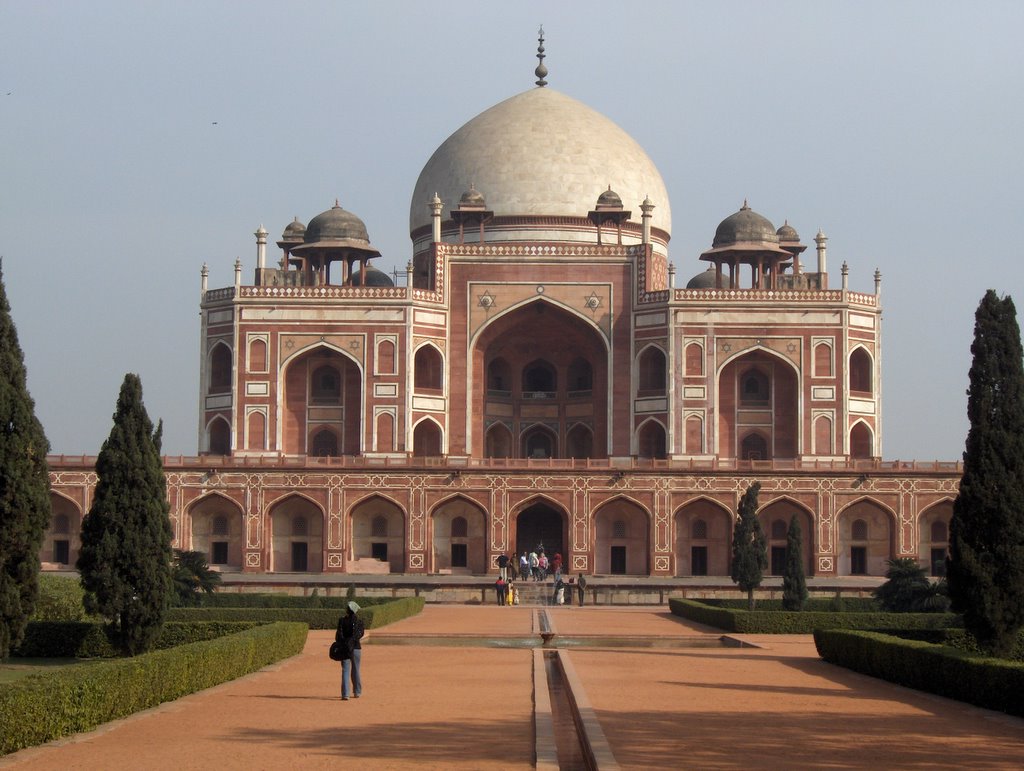 One of my favorite tombs in Delhi is Humayun’s tomb– it’s the precursor to the Taj Mahal (just as lovely, well.. somewhat more showy and terribly crowded). Humayan was the second ruler in the long line of Mughals from Kabul who invaded India.

It’s a wonderful, quiet tomb, built by his his widow–a combination of white marble and red sandstone, usually null of tourists and absolutely perfect in its symmetry. I could spend hours there and often stood in it’s large halls, empty except a few graves (Humayan’s and family) and not a soul nor tout would walk by me (self proclaimed guides, you get many of those in the old tombs–some quite endearing) It was like being given a private pass to the Lourve and you’re able to enjoy it all to yourself. For a brief tour check out the UNESCO panoramic view. This is a great web site–here’s the Taj at sunset, you really feel like you’re there!

Apparently since I’ve been they’ve put some money (courtesy of Aga Khan) into restoring the grounds and the traditional char-bagh, a 4 part water/garden system common in Mughal architecture–the Mughals also invented their own system of air conditioning, which consisted of small canal-like waterways throughout most of their palaces–an ingenious invention. The restoration hopefully has not attracted too many miscreant Europeans or Americans, please save it for the selfish local history buffs and expatriates which roam Delhi, like William Dalrymple … Dalrymple’s most recent book was about the last emperor who ruled Delhi–Bahadur Shah Zafar who also happens to be buried at the tomb. But the beauty of the tomb also goes hand in hand to the emperor it’s dedicated to, Humayun himself, whom I’m partial to because of his unfortunate luck and general eccentricity.

The Mughals have always fascinated me–brilliant, noble, ruthless and wildly interesting yet talent and luck sometimes skip generations and this certainly happened to Humayan. His father, Babur, an amazing warrior and ruler, was a descendant of Genghis Khan, and Tamarlane (who deserves his own post) and was the first Mughal to invade India. His grandson, Akbar, a scholar, patron of the arts and the most tolerate of all Mughals, invented his own religion incorporating aspects from Islam, Hinduism and Christianity. Their overall achievements are too long to list…

Jahangir was next, a bit boring and non-descript–you see talent skips a generation….His claim to fame could be Nur Jahan his twentieth wife and reputed exotic beauty and highly powerful in her own right, who eventually reigned from the inside due to his constant drunkenness (and they made a great movie about him: Mughal-e-Azam , a must see Hindi film). But he did produce Shah Jahan, builder of the Taj Mahal. Then there was Arungzab–his terrible tyrant son who imprisoned his own father, but was also the builder of the Pearl Mosque enclosed in the Red Fort in Delhi, so compact, simple, and resolute in its purpose, it melts your heart with its beauty and its perfect feeling of complete contentment upon entering.

Humayan himself was a strange one, to quote from Wikepedia:

“He was also deeply superstitious, and fascinated by Astrology and the Occult. Upon his accession as Padishah (Emperor), he began to re-organise the administration upon mystically determined principles. The public offices were divided into four distinct groups, for the four elements. The department of Earth was to be in charge of Agriculture and the agricultural sciences, Fire was to be in charge of the Military, Water was the department of the Canals and waterways while Air seemed to have responsibility for everything else. His daily routine was planned in accordance with the movements of the planets, so too was his wardrobe. He refused to enter a house with his left foot going forward, and if anyone else did they would be told to leave and re-enter.

His servant, Jauhar, records in the Tadhkirat al-Waqiat that he was known to shoot arrows to the sky marked with either his own name, or that of the Shah of Persia and, depending on how they landed, interpreted this as an indication of which of them would grow more powerful. He was a heavy drinker, and also took pellets of Opium, after which he was known to recite poetry. He was, however, not enamoured of warfare, and after winning a battle would spend months at a time indulging himself within the walls of a captured city even as a larger war was taking place outside.

But it was Humayan who began the confluence of Persian and Indian art by bringing many painters to India from Persia, influencing a style which remained prevalent throughout the next few ages. Sadly enough, he was deposed in Persia from his initial ten year reign in Delhi, for fifteen years, having been conquered by Shir Shah Sur. Finally able to come back, he recaptured Delhi only to die a year later, while tripping down the stairs in his library. No doubt due to his choreographed moves to align his steps with the planets!

How strange and wonderful it is to walk down these actual stairs on a hot afternoon in Delhi….!