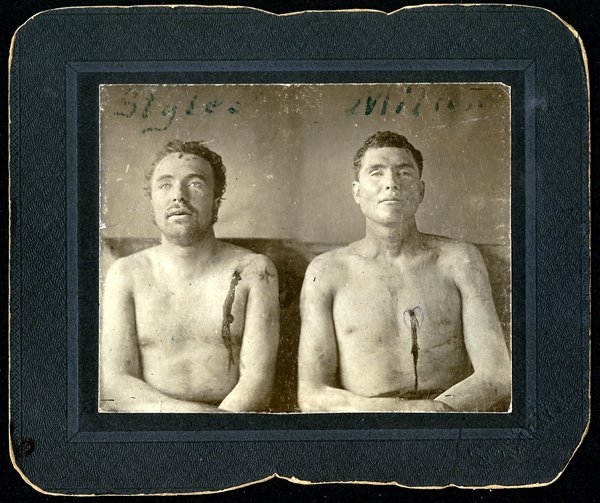 Here’s a composite autopsy photo of Clell Miller & Bill Stiles, aka Bill Chadwell, members of the infamous James-Younger gang, whose star player was Jesse James. The two members were both killed at the notorious Northfield bank robbery in Northfield, Minnesota in 1876, though Jesse was apparently not present during the raid. They were both propped up for the photograph after the autopsies and both look ready to go: “Well Bill, we’ve been shot to death, now let’s have a go, off to the Saloon…”

I have little interest in the wild west, it’s one of those periods – the dress, the history I find fairly bland – though I think this has much to do with 60s American Westerns and how actors/writers portrayed people/history during that time. I find the relationship/tensions between the Indians and the settlers horrifying (the treatment) and fascinating–the mix thereafter- even Bill Chadwell was half indian – you can see it in his features. Interestingly enough, Jesse James started out in his teens as a “bushwhacker” basically they were guerillas on both sides of the civil war who ambushed one another across state lines. In Jesse’s case-he was a confederate bushwhacker.

But I find the photography of the period fascinating, obviously because that’s the beginning of photography or it’s nascent leap towards something amazing. Somehow photographs from this period really show the character of the person, especially those civil war photos , even the staging of them can be forgiven, how could one not play around with scenes and cameras at the start of photography? Photography during that time is strange because if just invented a century before we could have seen photos of the French Revolution or portraits of Goethe, now we see Lincoln and the effect is eerie, the fact that you can see photographs of slaves that became political advocates itself is amazing.