Blog
You are here: Home1 / Blog2 / India3 / The Inheritance of Loss 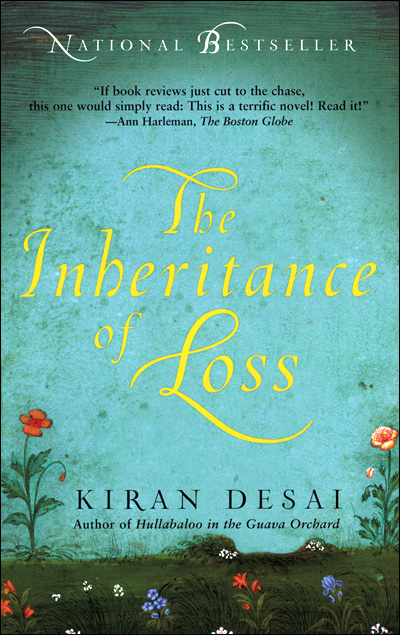 Kiran Desai’s novel which won her the Booker Prize last year. I had heard about her winning of course, and I was intrigued by it as it’s set in the north-eastern Himalayas, at the foot of Mount Kanchenjunga, which is very close to Darjeeling, where I went to school for seven years. See related, we had a lovely view of Kanchenjunga from the school, I’m very fond of this mountain and that area.

But as I have very little time these days to read, I had forgotten about it. Then I came across this excerpt from the novel on the NPR website that’s made me really want to to read it. I’m going to have to make the time and try it.

Without it he couldn’t leave. To leave he wanted a green card. This was the absurdity. How he desired the triumphant After The Green Card Return Home, thirsted for it-to be able to buy a ticket with the air of someone who could return if he wished, or not, if he didn’t wish. . . . He watched the legalized foreigners with envy as they shopped at discount baggage stores for the miraculous, expandable third-world suitcase, accordion-pleated, filled with pockets and zippers to unhook further crannies, the whole structure unfolding into a giant space that could fit in enough to set up an entire life in another country.

Then, of course, there were those who lived and died illegal in America and never saw their families, not for ten years, twenty, thirty, never again.

How did one do it? At the Queen of Tarts, they watched the TV shows on Sunday mornings on the Indian channel that showcased an immigration lawyer fielding questions.

A taxi driver appeared on the screen: watching bootleg copies of American movies he had been inspired to come to America, but how to move into the mainstream? He was illegal, his taxi was illegal, the yellow paint was illegal, his whole family was here, and all the men in his village were here, perfectly infiltrated and working within the cab system of the city. But how to get their papers? Would any viewer out there wish to marry him? Even a disabled or mentally retarded green card holder would be fine-

There is a podcast with her discussing the book on the NPR website as well, here’s a direct link to the mp3 file.

Here’s a link to the book on Amazon, if you’d like to read more reviews.