Documents, sketches, post cards and what-not once belonging to Kafka may finally be see the light of day thanks to the untimely death of Esther Hoffe, who recently died at the age of 101. Hoffe was the former secretary and lover to Max Brod–executor and dear friend to Kafka–who fled Nazi germany, suitcases over flowing with the author’s manuscripts in hand. One can imagine him running over the alps like the Von Trapps–surrealistic literature clutched in his sweaty hands. (Brod managed to save the manuscripts but not Kafka’s three sisters, all who died in Auschwitz) Somewhere these scraps lie in her Tel Aviv apartment, presumably under piles of kitty litter and pet bowls.

“But authorities in Tel Aviv have warned that the papers, with their high sulphuric acid content, may have stood up poorly to conditions in Hoffe’s damp flat in the centre of Tel Aviv and to the hordes of cats and dogs which she kept until two years ago when health inspectors intervened after neighbours complained about the stench.” Read the rest of the article.

Kafka, as he may have looked today, if he worked at Bear Stearns. 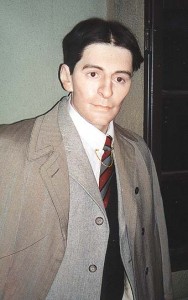 Encounters at the End of the WorldPluck Yew!
Scroll to top