Blog
You are here: Home1 / Blog2 / Identity3 / Caligula in Color

“God’s in Color” is an ongoing exhibit at Harvard’s Sackler museum, displaying Greek and Roman statues in full color–as they would have appeared in their age. It’s the technicolor version of the ancient world, vibrant colors and wonderfully cartoony–like the recently retouched Sistine Chapel. Here’s Caligula, before and after, to read further: Archeology’s online magazine.

From the museum website: The color reconstructions—based on close examination and scientific analysis of the scarce traces of paint remaining on the surfaces of the originals—include a number of well-known masterpieces, such as the Peplos Kore from the Athenian Acrop-olis, pedimental sculpture from the Temple of Aphaia on the island of Aegina, and the so-called Alexander Sarcophagus. The reconstructions are juxtaposed in the galleries with ancient statues and reliefs from the Art Museums’ own collection in their current, colorless state of preservation. The exhibition opens up a world of richly attired deities, proud warriors, and barbarians in dazzling costume and dispels a popular misconception of Western art: the white marble statue of classical antiquity. 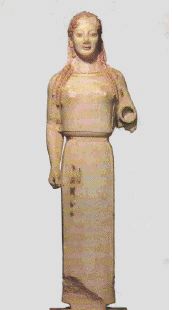 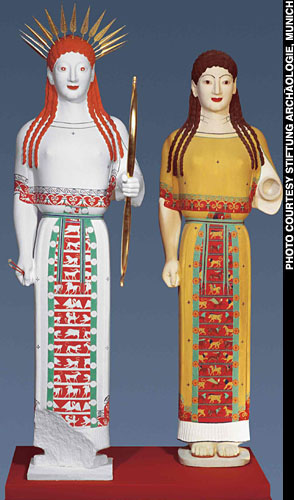 Here’s the Peplos Kore, the original statue–ghostly, poised yet alluring and the painted version–the vivid color, garish yet captivating, reminiscent of a Victorian carnival display?

This has to be one of the more interesting ones: It’s called “Head of Youth” from the Museum Brochure. Perhaps it should be called “Marilyn Manson goes Greek.” 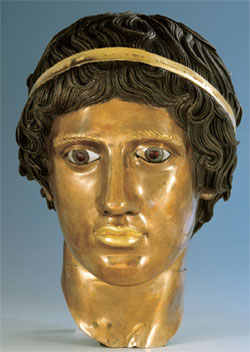 All I’ve got is a photograph…..Lawrence Lessig on Barack Obama
Scroll to top