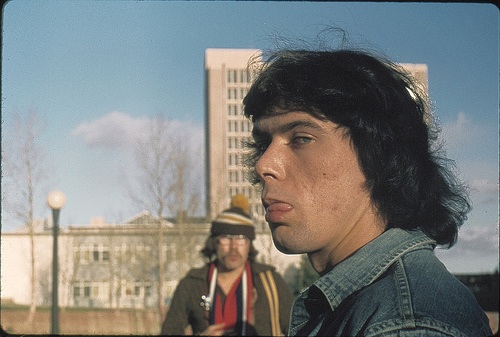 I found this photo recently online and decided this about summed up every creepy boyfriend my friends, sisters, and I have ever had. It’s a summation in two parts; the guy in the background is the quirky, geeky boyfriend–the one you meet at a thrift store or animation festival, the one you think at first, is intriguing and eccentric, full of dry humor and colorful original thoughts. He wears ugly winter hats even in the summer (like the fellow in the photo) and carries random objects around with him like leaky pens, bottles, sandwiches or old musty books he’s reading. He likes to state bizarre ideas out loud; use obscures references and has odd facial tics you find amusing.

I had the perfect archetype of such a boyfriend; when we first met he wore white sport socks pulled up to his knees – this was not the seventies – and small white tennis shorts. He was thin–not quite junkyesque, but still an annoying thinness, his thighs seemingly barely larger then my forearms. His hair was tousled, loose curls falling everywhere; large brown glasses perched over a rather simple, strong face. One friend later said he was a young Mick Jagger, she was right, his lips were full, sensuous even, his face smooth and verging on handsome but he was the typical nerd, his physicality foreign to him–disposable, a body he threw on every day, carelessly draped over his frame as an afterthought.

The night I met him he brought a crystal garden with him-those glass tanks where miniature colored stalagmite grow–we weren’t sure why but it provided a shrewd forewarning of his character to come–unseen quirks that would spring out from nowhere, creep out like slow weeds burrowing out from cement cracks. The terrible habits–peeing in the kitchen sink or arguing with himself–yes himself, the showers he seldom took, the collection of bugs covered in latex he kept in his basement, the photograph of the seventies star taped to his ceiling over his bed. Later after he left that night, my friend said, You’re going to go out with him, Yeah right, I said, and I did of course, it lasted for a few years, a sporadic strange relationship that had no real definition.

The other guy, the guy in the foreground, is the guy who you are at once repelled and attracted to, he’s a creep, you know it but don’t care. And underneath the layer of oil, swarm and polyester there’s that stiff layer of raw sexiness that exudes its terrible odor. He’s the guy in Dazed and Confused, the Linklater film–the older guy that hangs around your high school and dates the younger girls, he’s Eric Roberts, the stalker and eventual killer in Star 80, he’s a boy my sister dated when she was fourteen, an older slick, red neck boy with long, oily black hair, shiny eyes and curled lips who harassed her on the school bus in the wild confines of the Virginia countryside. The guy who does the peace sign with his fingers then out comes the tongue and he wiggles it between his two Fingers. This is the guy with the fingernails that are a little too long, with the smile that hints at a surplus of hidden tooth decay, with the perpetual outline of his penis pushing through his pants. He’s your best friend’s brother who hooks his thumbs in his jeans, leans back and stares at you at her dinner table. The guy that whispers perverted, crass things he wants to do to you in your ear when you walk by him in the hall. This is the guy you eventually sleep with, then later wonder why but do it again.

Where are these guys now?

The Darjeeling LimitedBonobos
Scroll to top